The Government needs to continue to ‘Look East’ and support the region’s transport infrastructure to keep the wheels under UK PLC’s economy, a Summit of top local politicians and business leaders heard today (26th February).

Delegates at the Transport East Summit at Ipswich Town FC’s stadium heard how welcome recent investment would benefit the region’s road and rail networks, but that a host of key improvements were still needed.

This further investment would be key to keeping the national economic picture healthy, through the East’s 16 major international transport hubs, which include three airports and 13 ports. Six of these ports are major gateways for import and export trade – including the port of Felixstowe, where 40% of maritime-borne goods enter the UK.

The biggest challenge in maintaining the East as the nation’s gateway was ensuring that investment not only continued but also addressed the challenge of climate change and carbon reduction.

Transport East is also set to launch its first strategy, which will aim to deliver growth and prosperity, while at the same time protecting the environment and making maximum use of new technologies.

Lord Alan Haselhurst, Chair of the West Anglia Taskforce told the Summit that the Government needed to ensure it did not lose sight of the importance of the East.

He said: “I applaud the Government’s desire to level up infrastructure investment across the UK – particularly in the North – but alongside this, the West Anglian rail line and indeed rail provision in East Anglia as a whole, should not be forgotten.

“We have seen decades of underinvestment which this Government should now address. This is vital to ensure continued growth and prosperity across the region.”

Transport Minister Baroness Vere said: “This Government is committed to levelling up the country with the vital infrastructure it needs.

“Regional bodies play a vital role in supporting economic growth for local people and businesses across the country which is why I am delighted to support the work of Transport East today.

“I am encouraged to see local partners working together on their priorities for connecting places and communities, unlocking the great economic potential for the East of England.” 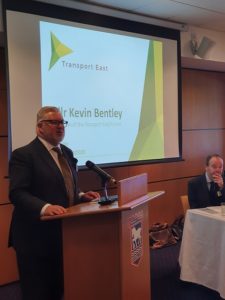 Cllr Kevin Bentley, Chair of Transport East and Deputy Leader of Essex County Council, said: “Our biggest challenge is keeping our people and our economy moving now and in the future and ensuring we don’t damage the environment as a result.

“We have to develop transport infrastructure which offers faster, greener, better alternatives to the current options. We need the support of the Government in that work, but we also need to engage residents and businesses large and small across the region in helping develop them.”

Further information on Transport East is available at www.transporteast.org.uk